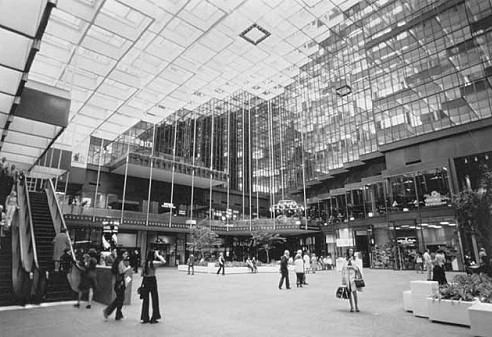 Minneapolis is very fortunate to have such a picturesque skyline. The buildings come together nicely, from the Foshay Tower to the in-progress Eleven Condominiums, to guarantee striking views from every angle. The pinnacle of our skyline, tallest building in the city, and subject of this article is the IDS Center; the catalyst of skyscraper construction in Minneapolis.

In 1963, architect Ed Baker was chosen to design a twelve-story quarter block office building on 8th Street and Nicollet Mall. Investors Diversified Services (now Ameriprise Financial) agreed to join as the anchor tenant four years later, and later that year Dayton Hudson Corporation (now Target Corporation) came aboard as a co-anchor tenant. With two major tenants, the project expanded to a fifty-one-story tower complex that would take up the entire block, and award-winning architects Philip Johnson and John Burgee were brought in to work with Ed Baker. Johnson was ecstatic about the project’s location. He cited its central downtown location, Nicollet Mall, the skyway system, and its close proximity to Dayton’s and Donaldson’s. Because of this, he wanted to make this project the new epicenter for Minneapolis.

At this time in the skyscraper architecture world, many people were getting sick of the typical big, boxy, bland looks of many office buildings across the United States. In order to make his project stand out and create something the city would be proud of, Johnson chose to utilize asymmetry, use volume over mass, and rejected ornamentation. This ultimately led to the “zog” design, as he called it, with the zigzagging corners of the main tower, the use of chrome coated semi-mirrored glass, and the famous crystal court.

The construction lasted from 1969 to 1972, and when it was completed, it rose 792 feet and fifty-seven stories, with fifty-two of them available for occupation. Along with the main tower, a nineteen-story tower was also made for the Marquette Hotel, an eight-story annex building was built along Marquette Avenue, a two-story retail building was put on Nicollet and 7th, and connecting all the buildings is the seven-story Crystal Court.

While designing the Crystal Court, Philip Johnson drew inspiration from Venice’s San Marco Plaza. He wanted this space to not only be a place to gather and relax, but he also sought to make sure there was efficient pedestrian flow, which led to another game-changing feature of the complex; skyway connections on all four sides. Johnson was able to foresee how popular and important skyways would be in Minneapolis, as he wanted to decrease the amount of vehicle traffic downtown and move it to the skyways. When designing the skyway entrances, he made it a point to not have them lineup with the ground level entrances, which created a better flow around the Crystal Court. In 1972, there were only seven skyways in Minneapolis, and none of them were connected. Once the IDS Center skyway connections were complete in 1974, the skyway system connected eight blocks in downtown.

In 1983, the fifty-first story observation deck was closed and converted in more office space, and fifteen years later, the Crystal Court underwent a multiple award-winning renovation by HGA Architects which included a grove of olive trees and white benches. After featuring in The Mary Tyler Moore Show, the IDS Center has hosted many film crews since. Gary Busey’s Fooling Around, Prince’s Purple Rain, The Mighty Ducks, Tim Allen’s Joe Somebody, and Charlize Theron’s Young Adult all filmed scenes in the Center. The Crystal Court also hosted President Bill Clinton in 1994, and has been the media headquarters for the 2008 Republican National Convention and Super Bowl LII.

My favorite fun fact about the IDS tower is that every floor has thirty-two corner offices, which means there are over 1,500 corner offices in the building. Surely that’s a world record! There might be a day when the IDS Center is no longer the tallest building in Minneapolis, but its indispensable presence in downtown has been and will always be vital for the area’s success.