In the Midst of History

The IES Lighting Award was presented to Michael Cohen of Schuler Shook for the IDS Crystal Court project. 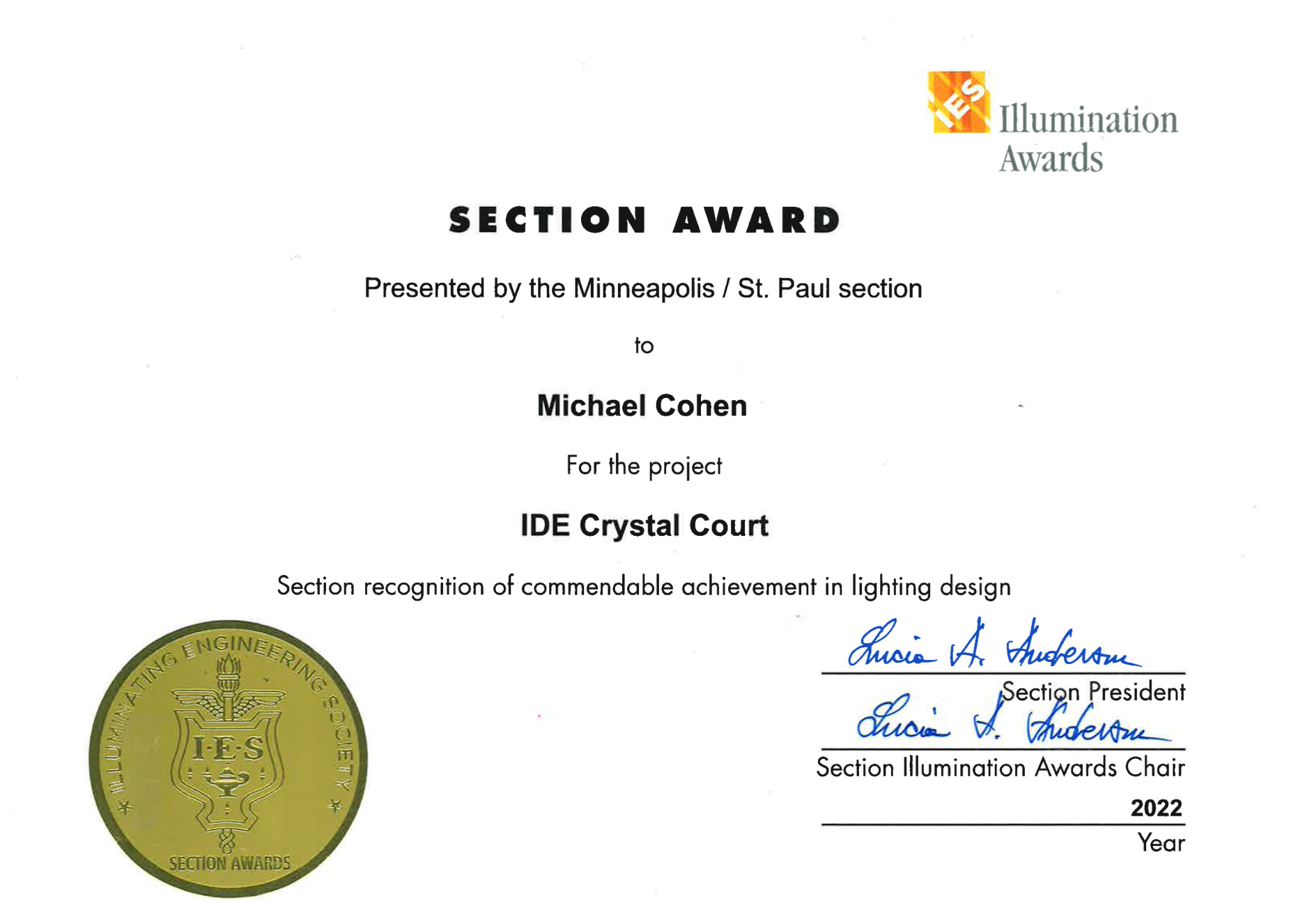 The property is recognized for demonstrating leadership in energy and environmentally efficient property and our continued commitment to improvement.
Read Article

noa opens their doors in the IDS Center Crystal Court. 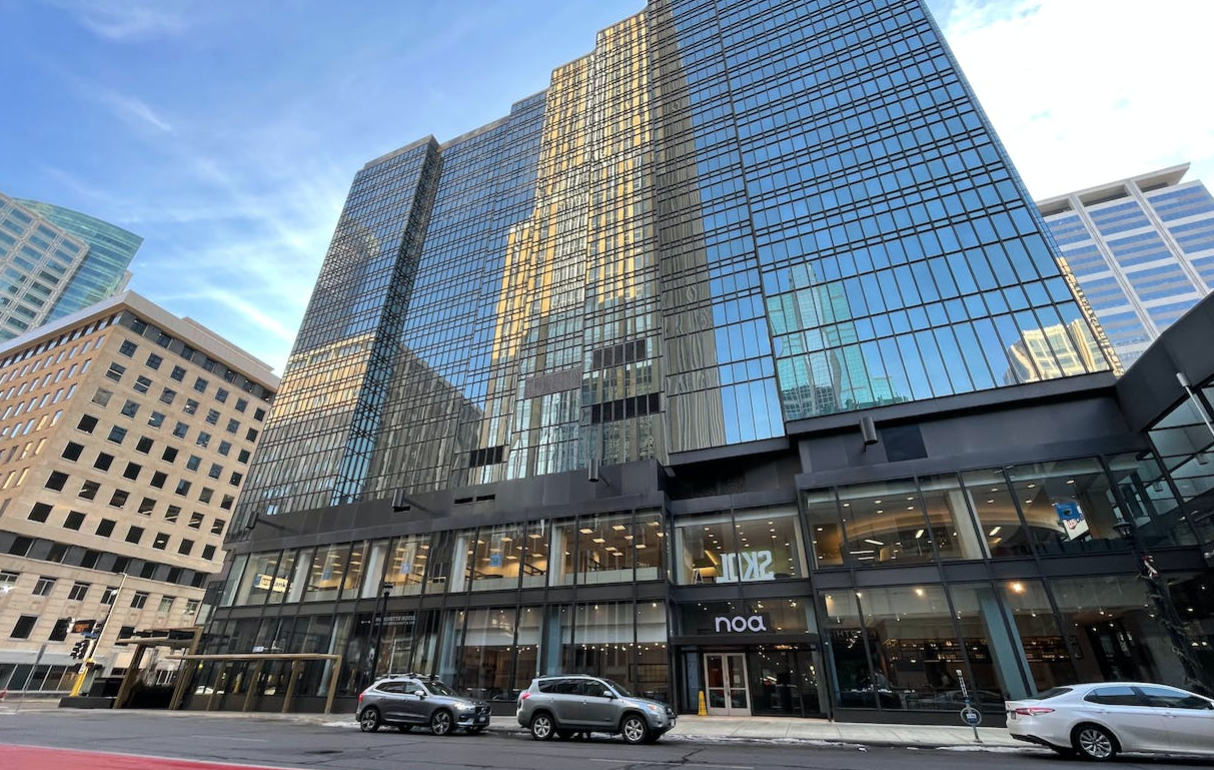 WCCO highlights the IDS Center as the tallest building in Minnesota. 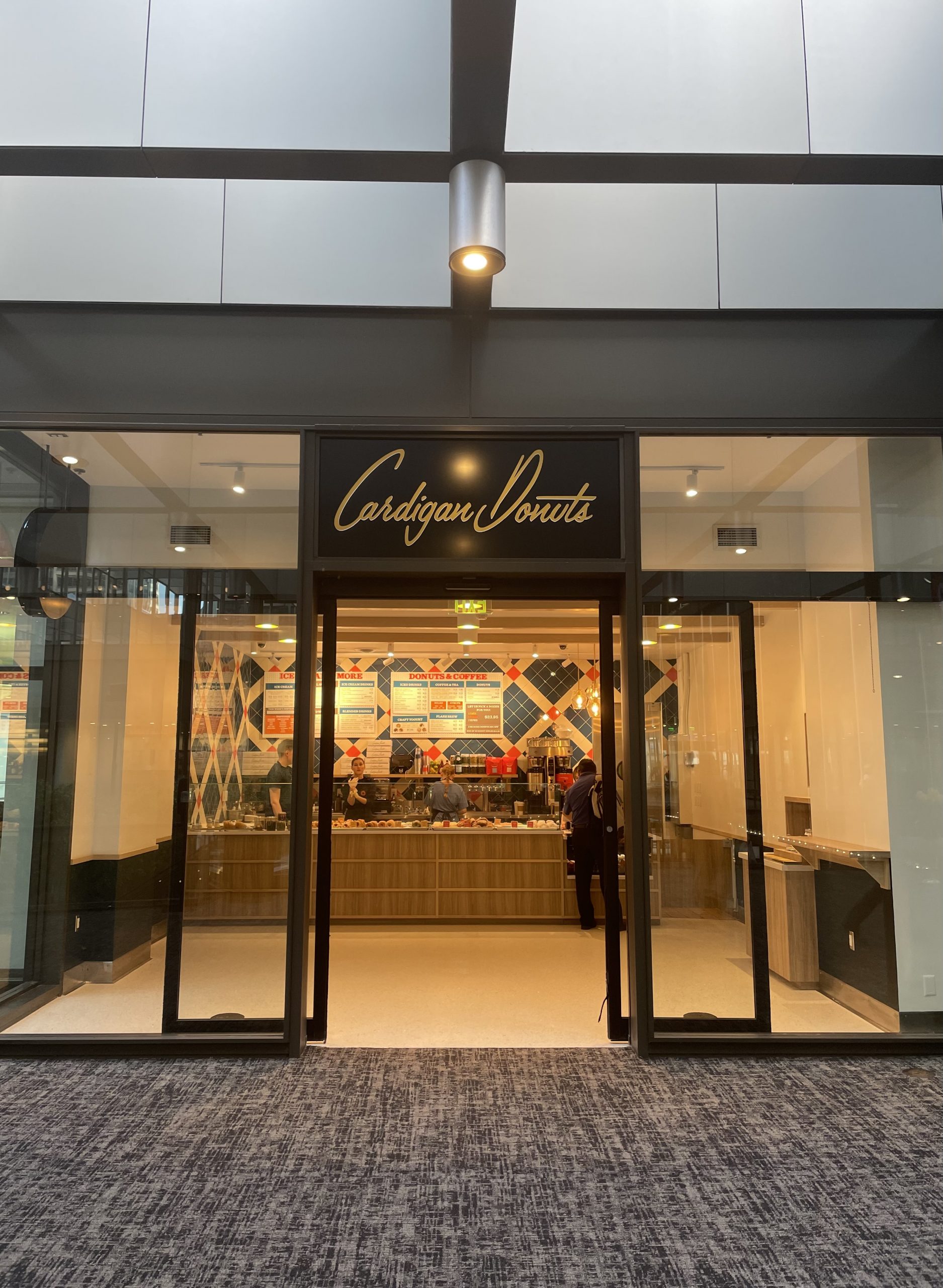 The IDS Crystal Court Renovation project was named as a Top Project of 2021 by Finance & Commerce. 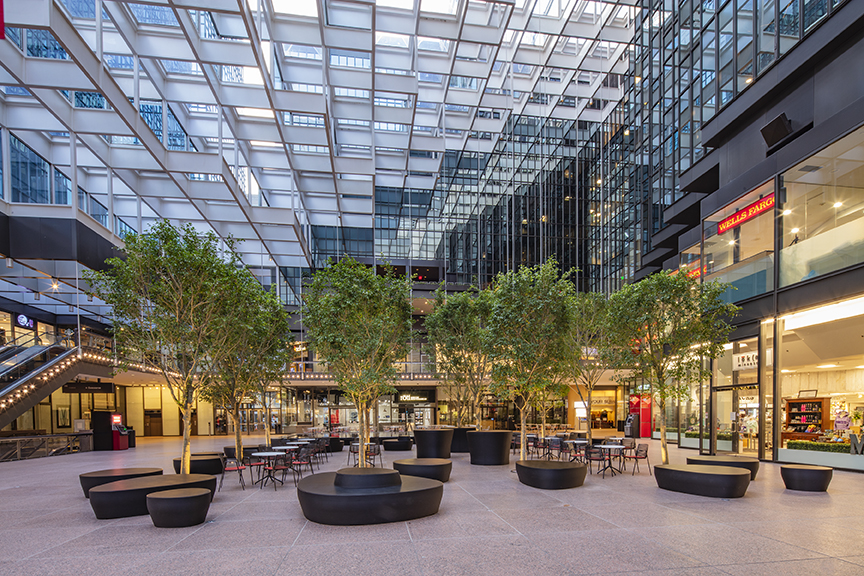 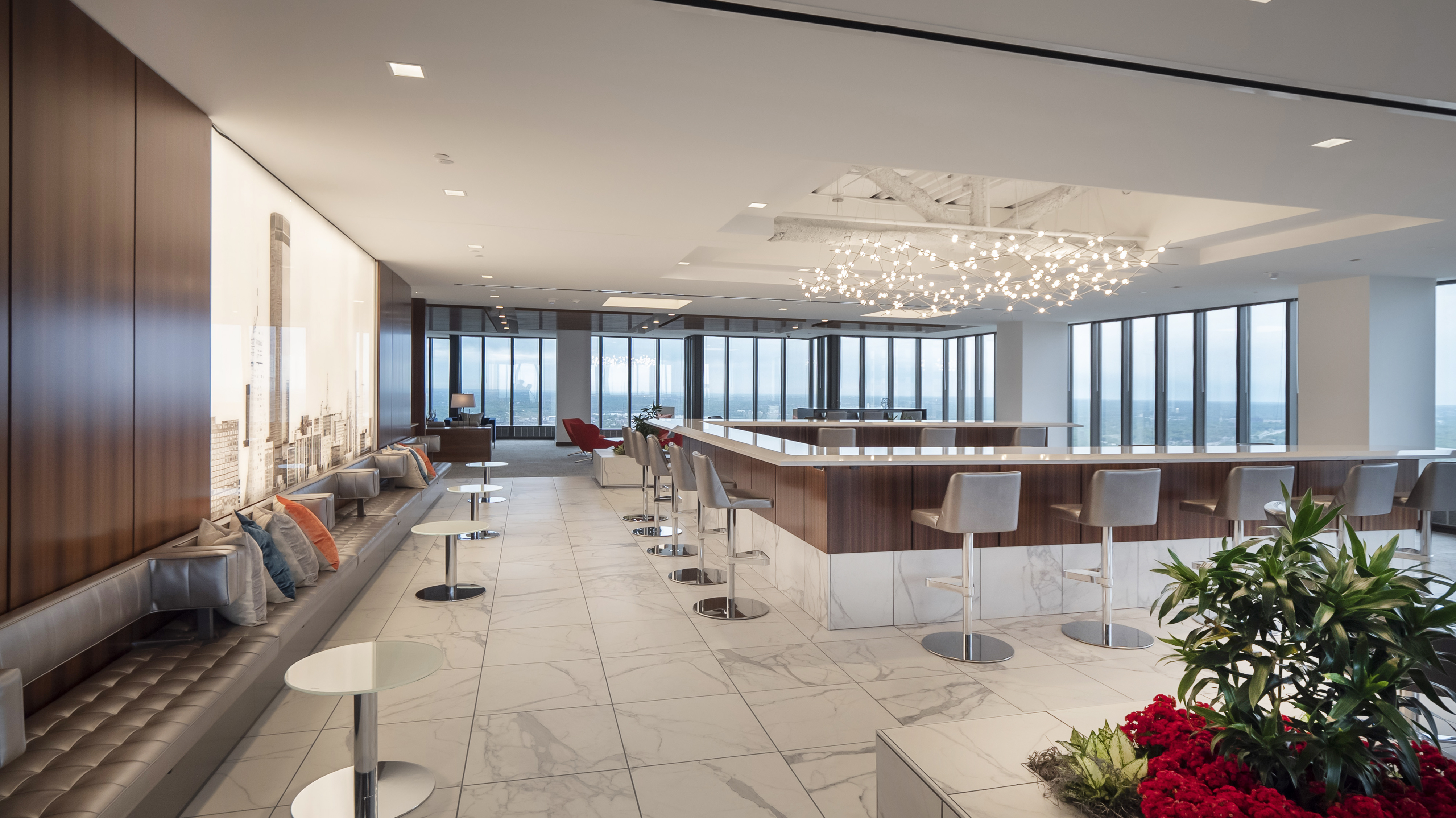 The Crystal Court and local architect Nathan Johnson was featured in Architecture MN. 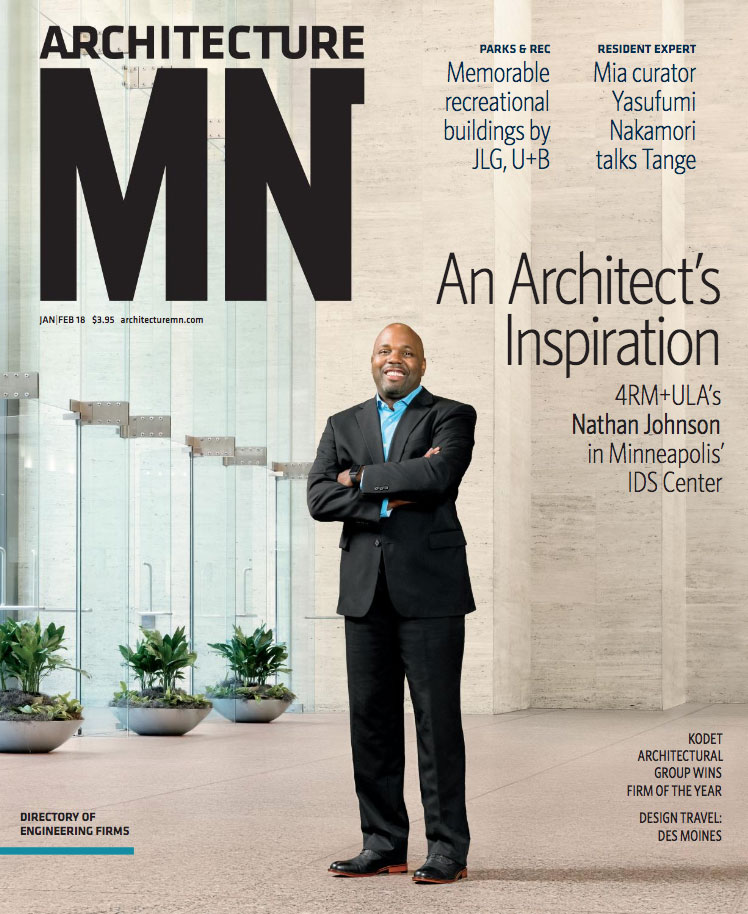 Super Bowl kickoff with the IDS Center hosting ESPN in the Crystal Court and a plethora of fun events out on Nicollet Mall. 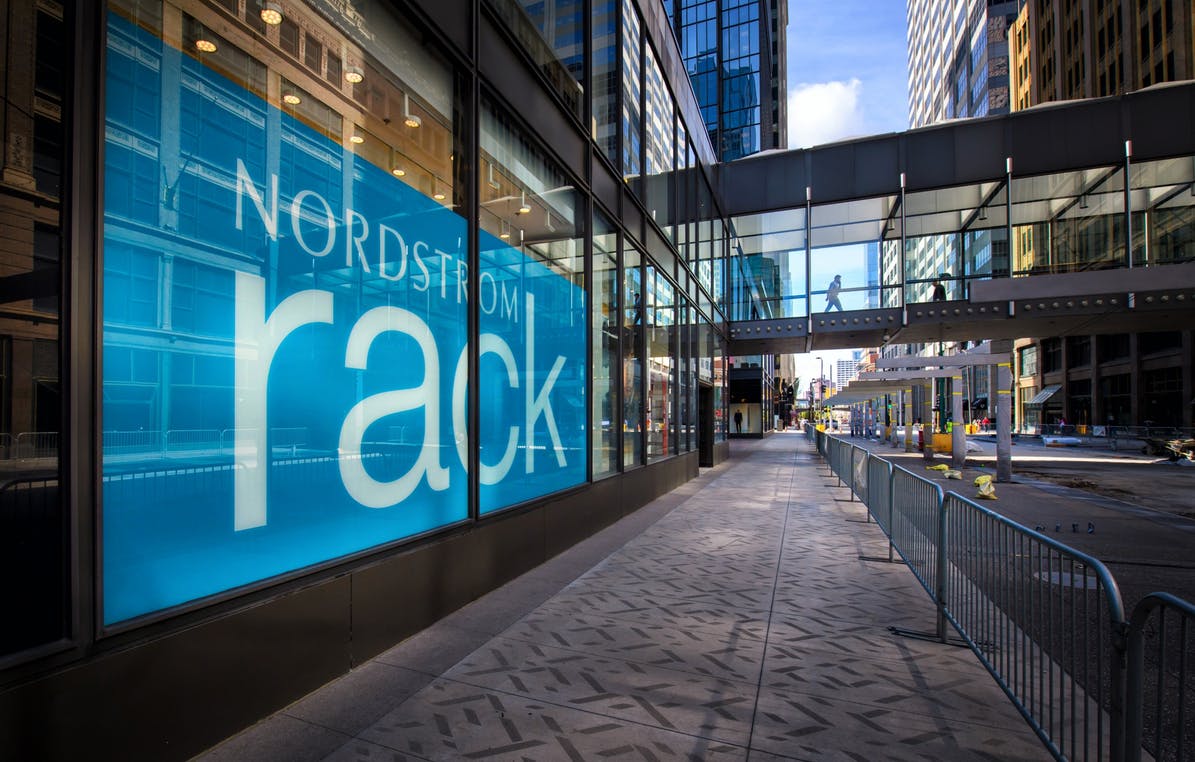 The IDS Center is in the spotlight as labeled as a ‘Post-Modern Marvel’ in the Journal of Property Management. 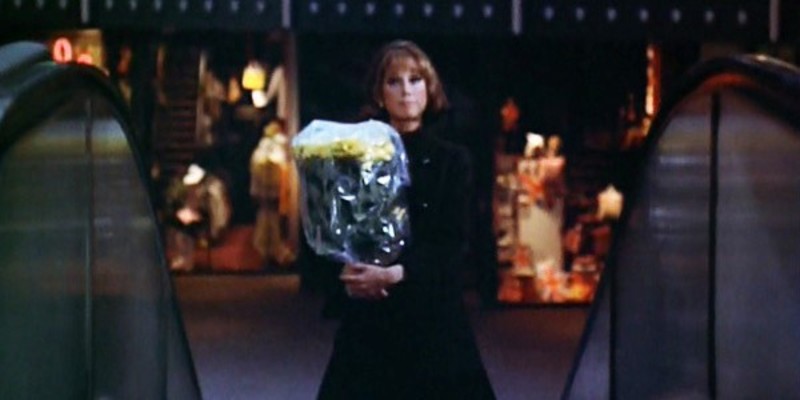 Bank of America pushes into Twin Cities with a branch in downtown Minneapolis. 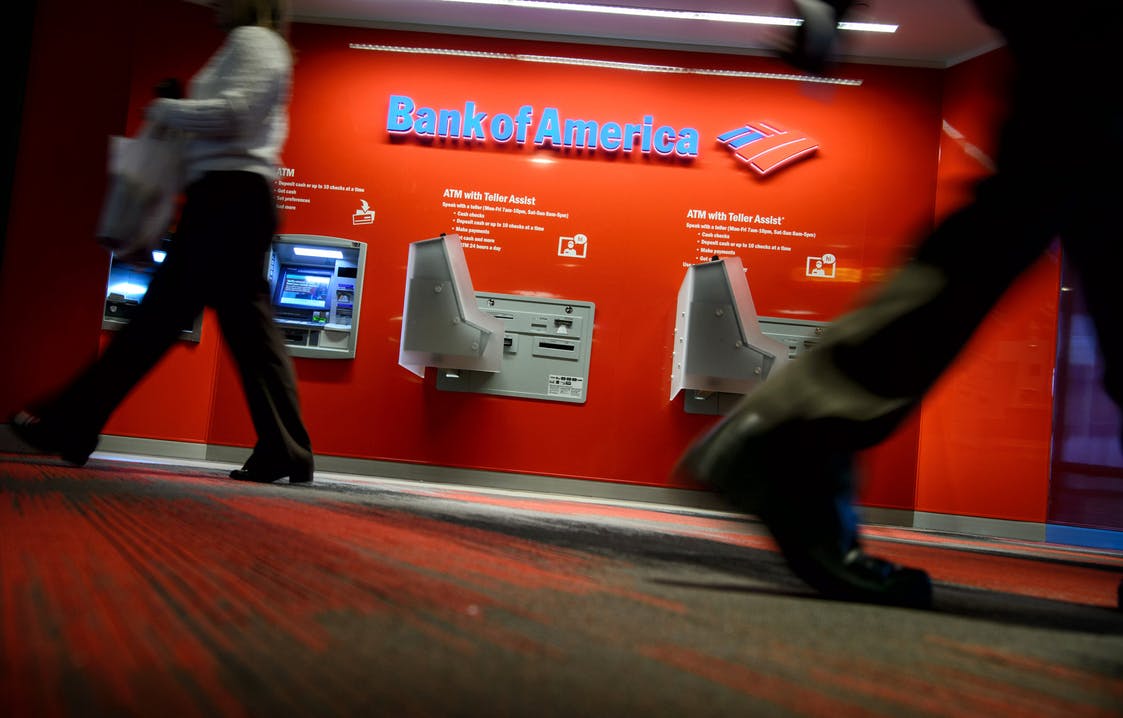 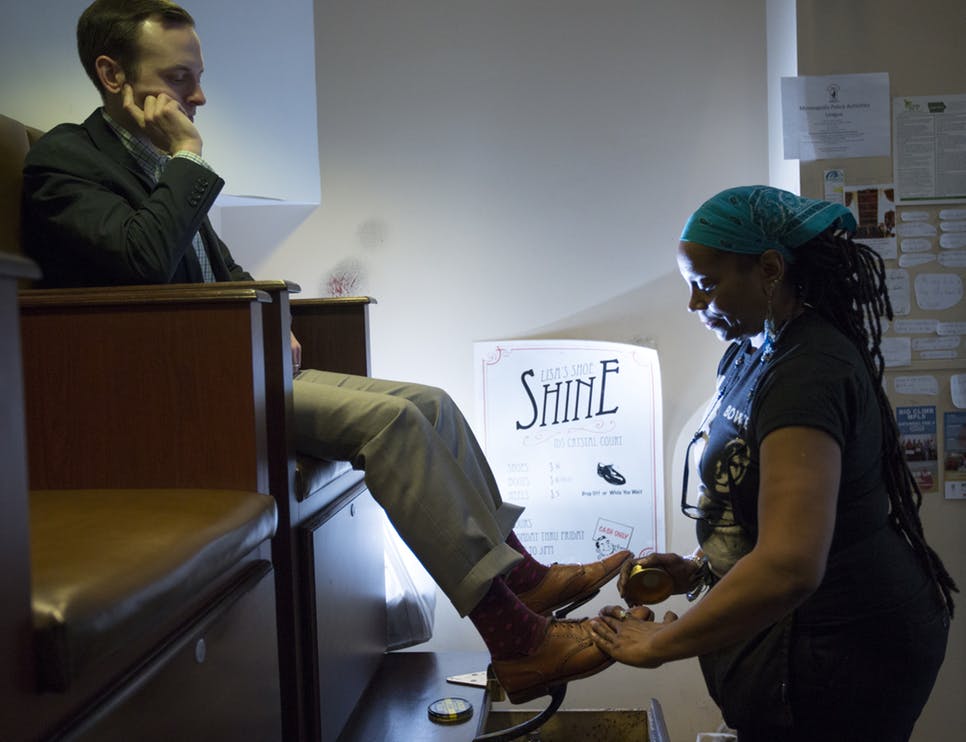 IDS Tenant, Perkins + Will in the news for their new flexible open work space.

New lease executed for Perkins + Will on 3rd floor as well as the first Minneapolis retail bank location for Bank of America.

Conference Center and Fitness Center open on the 3rd floor for tenant use.

Accesso Services signed a lease for 30,000 SF with UBS Financial Services to lease the 29th/30th floors.

This makes UBS only the third tenant to occupy the 29th floor in the 41 hear history of the tower.

IDS Center is featured in a WCCO-Channel 4 segment of “Good Question.”

The question answered was ‘What is really allocated on the roof of the IDS Center?”

Life to the Max, with Mike Max, features the iconic history of the IDS Center.

Xcel Energy once again recognized the IDS Center as an Energy Efficient Partner.

In August, during the National Concierge Association Conference, the IDS Center’s concierge was recognized with two awards: Outstanding Service of the Year and volunteer of the Year. 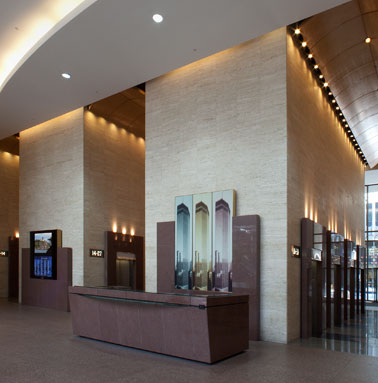 IDS Center’s Green Team is recognized by Xcel Energy and BOMA with the Outstanding Tenant of the Year Award for their consistent work towards sustainability and energy efficiency.

The property is recognized for demonstrating leadership in energy and environmentally efficient property and our continued commitment to improvement. 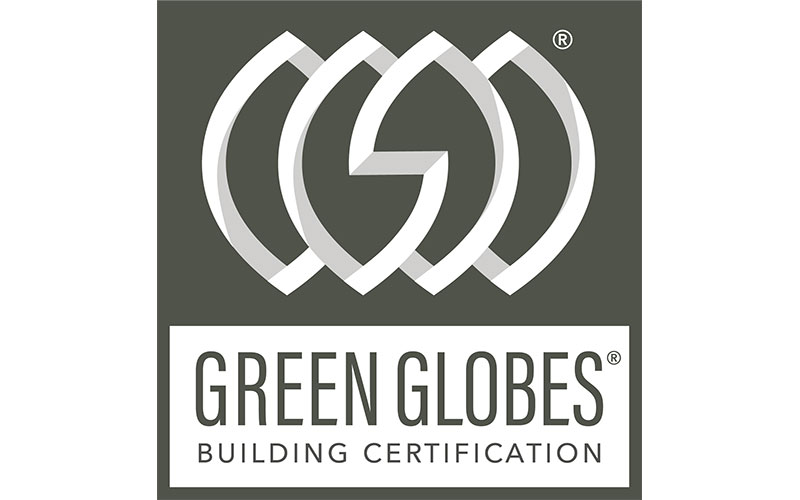 IDS Center wins the local and regional TOBY Award (The Office Building of the Year) and competition for BOMA office properties over 1 Million square feet advances to the international competition for the second straight year.

Inland receives the BOMA 360 Performance Award for best practices in operations and management.

Scenes from “Young Adult” starring Charlize Theron are shot in the Crystal Court. 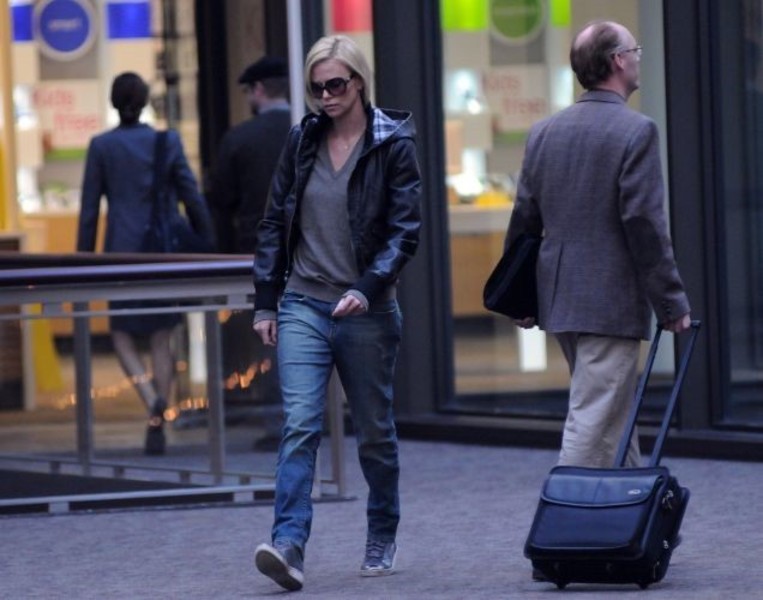 The Minnesota Department of Natural Resources places an interactive display in the Crystal Court promoting the state’s parks, trails and outdoor opportunities.

Crystal Court interactive Clock Tower and Kiosk wins a Silver Medal in the Public Spaces category of the Apex Awards, honoring the best of digital signage in the world.

A new cement roadway on Marquette and Second Avenue is complete with high hopes for improved traffic flow downtown and system wide.

IDS Center management helped guide the City of Minneapolis and its planners to bring about this improved roadway.

A permanent fall protection and ice melt system is installed on the Crystal Court roof.

The Downtown Improvement District (DID) is launched making the core of downtown safer, cleaner and greener then ever before.

The IDS Center management played an active role in creating and implementing the DID. 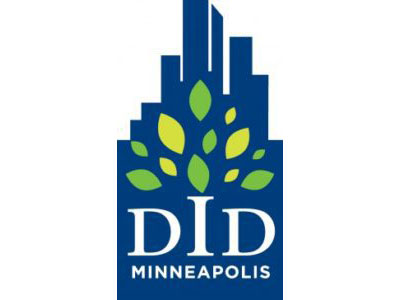 Inland undertakes the first of many annual e-cycling events during Earth Week, which encourages tenants to recycle their electronic waste in an environmentally friendly way.

This initiative saved five tons of electronic waste from going into the waste stream.

The Twin Cities plays host to the Republic National Convention. The Crystal Court is the official VIP media hub for local and national media networks.

Inland contracts for the installation of a waterproof roof membrane for the intricate Crystal Court drain system.

The John Buck Company of Chicago buys the IDS Center.

The U.S. Trademark Commission received an application for “IDS”. It was examined, published and issued a Certificate of Registration.

IDS installs a complete security access system throughout the common areas of the complex.

The system integrates all common area doors, freight and passenger elevators. A photo I.D. badge is needed for security purposes to access the property and tenant spaces after normal business hours.

To commemorate the events of September 11, 2001, IDS Center installs a flag in the Crystal Court and annual blood drives are shifted to on or about September 11, Remembrance Day, and Flag Day.

The IDS Center Crystal Court played host to ESPN’s broadcast crew of Dick Vitale and Digger Phelps. In exchange for use of the Crystal Court, ESPN donated tickets and $10,000 to a local charity.

Original tenants IDS (now Ameriprise) and Dayton’s (now Target) vacate over 600,000 square feet of office space after 30 years of occupancy for their own new dedicated headquarters.

A comprehensive releasing and rebuilding strategy is in full swing. 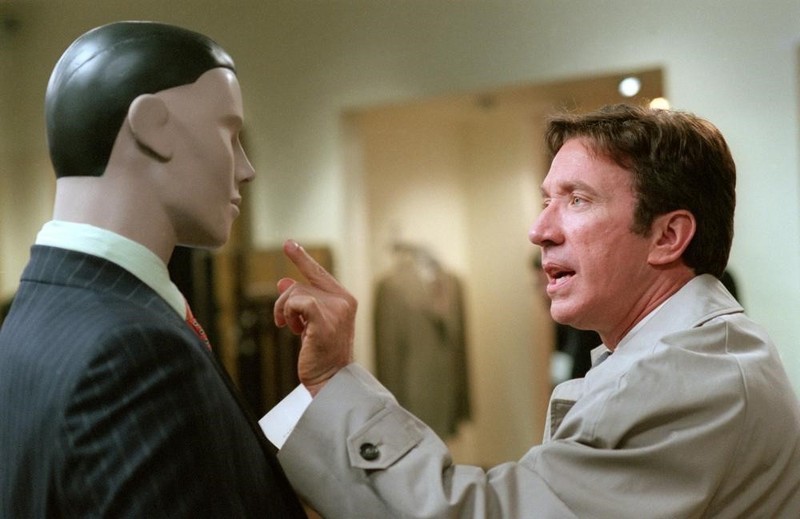 The strategic repositioning plan includes a full renovation of all 600,000 SF.

Kennedy-Wilson replaces Heitman as Management for the IDS Center.

The renovation of the Crystal Court wins an AIA Honor Award.

Management partnered with Xcel Energy to complete a full lighting retrofit for the entire tower.

The estimated savings of consumed electricity was 41-watts per fixture. It resulted in one of the largest rebates ever given by Xcel Energy, who wrote a check to tenants for over $400,000.

Reinstallation and re-dedication of the Crystal Court.

The re-dedication ceremony was officiated by then Mayor Sharon Sayles-Belton. Council Member Lisa Goodman and Council President Jackie Cherryholmes were also in attendance. White benches, black olive trees and a 105-foot fountain (designed by HGA Architects and Engineers of Minneapolis) inject new life into the Crystal Court, which serves as the crossroads for Minneapolis commerce, retailing hospitality and the social hub of the city.

On Friday, April 8, 1994, the Crystal Court and Marquette Hotel were transformed into White House headquarters for a day.

President Bill Clinton took the stage at noon in the Crystal Court, rallying for support of his health-care plan while 3,500 guests watched and listened. As a downpour raged outside, the president said, “I’m very grateful to the people from IDS Center ownership who made it possible for us to meet inside instead of outside today.” 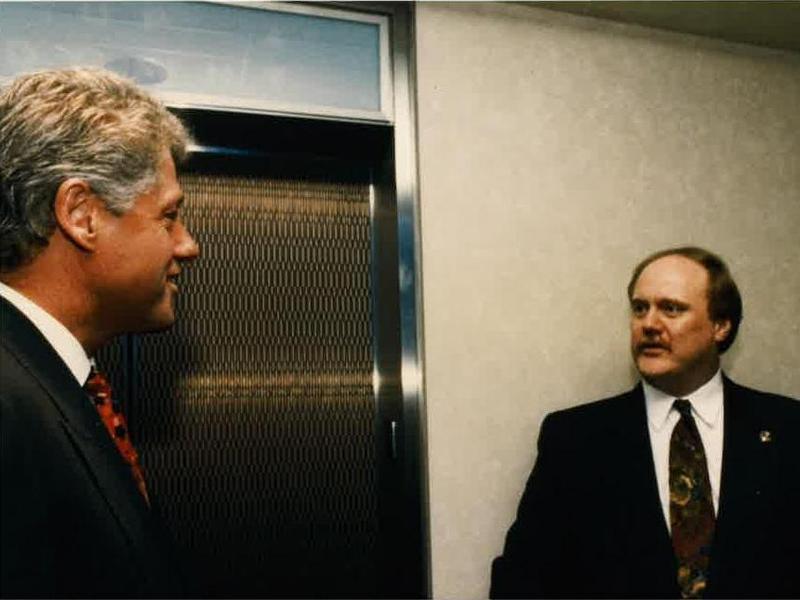 Based on the design direction of Shea Architects, the tower’s lobby and elevators receive a makeover intending to brighten the tower lobby and add more elegance.

Woolworth’s closes, replaced by The Gap and Banana Republic among others. The Orion Room closes and the Minnesota Alumni Club moves out of the IDS Center and is replaced with Windows on Minnesota.

A full modernization of the elevator cabs and dispatching system is completed.

A yellow ribbon for Operation Desert Storm is situated 620 feet above street level to support the troops.

“The Mighty Ducks” movie, starring Emilio Estevez, filmed scenes in the Dayton Hudson Corporation board room on the 15th floor along with scenes in the Crystal Court. 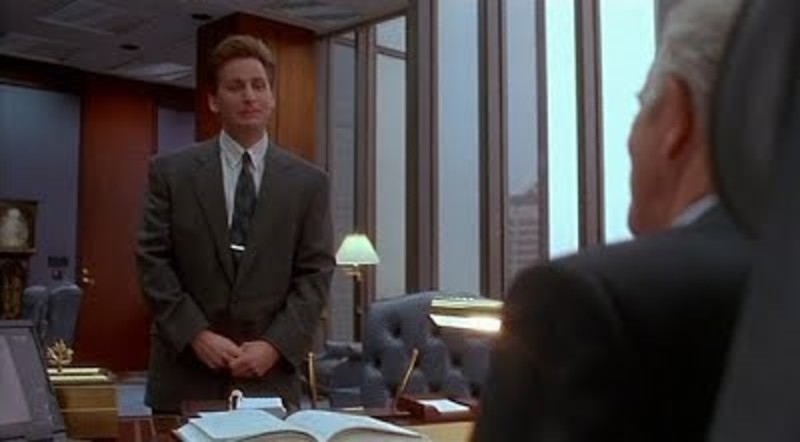 WIN TWINS! Twins fever made its way to the IDS Center and a message was lit throughout the World Series until the Twins won Game 7 at the Metrodome against the St. Louis Cardinals. 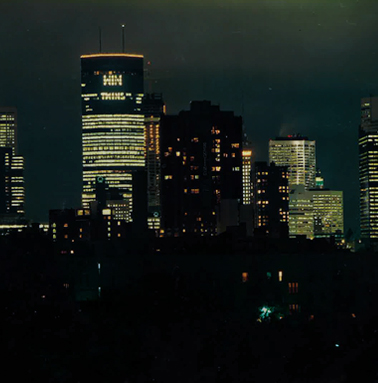 Prince filmed scenes for the movie “Purple Rain” in the Crystal Court. 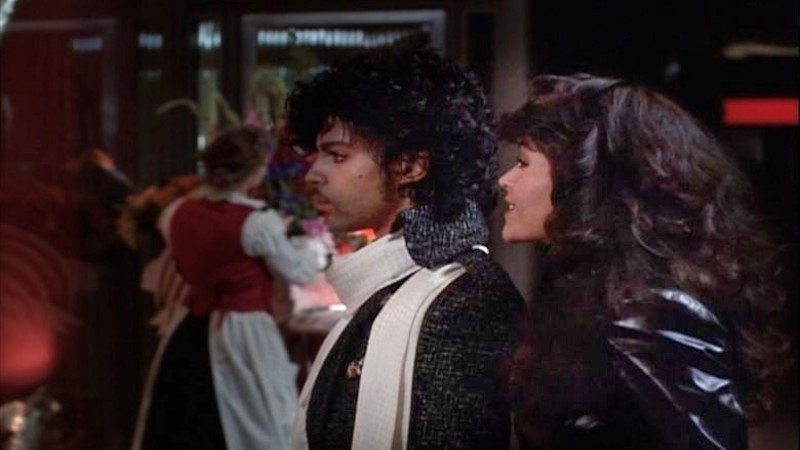 The observation deck closes and is converted to premier office space.

Each year since its inception, hundreds of participants race up the stairs from the lobby to the 50th floor to raise money to fund research to fight this crippling pulmonary disease.

Oxford Development buys the IDS Center for $200 Million. The deal stipulates that the IDS name remain.

On June 19, a violent storm swept through the Twin Cities hurling debris at the IDS center windows. A total of 12,000 windows were damaged. Fortunately, no one at the IDS Center was injured in the storm.

On March 5, 1979, NBC broadcasts the Today Show live with Jane Pauley and Tom Brokaw from the IDS Center in honor of its new affiliate, WTCN-TV Channel 11.

Actor Gary Busey filmed scenes from the Tony Randall movie “Fooling Around” in the Crystal Court.

A pair of 111-foot tall FM radio antennas are added to the tower’s roof.

IDS Center gained national attention and becomes a TV star when it appears in the opening credits of “The Mary Tyler Moore Show”, which was set in Minneapolis. A statue commemorating the scene arrived in 2002. 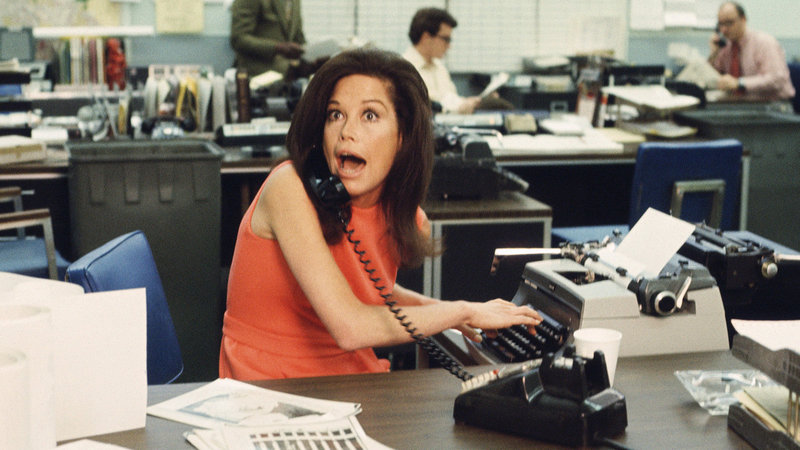 A Symphony Ball is held in June celebrating the Grand Opening; among the guests of dignitaries is Andy Warhol.

This is the first of many events in the Crystal Court, which officially opens to the public four months later. The Marquette Inn (now The Marquette Hotel) opens 51st floor observation deck opens November 22. 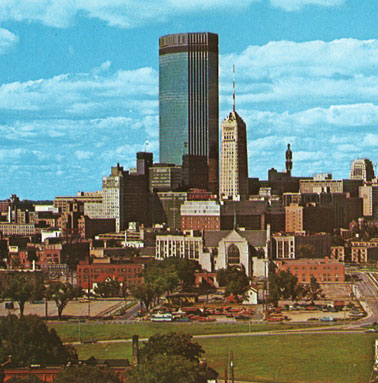 Tenants start moving into the tower in February. The tower’s address is 80 South Eighth Street. 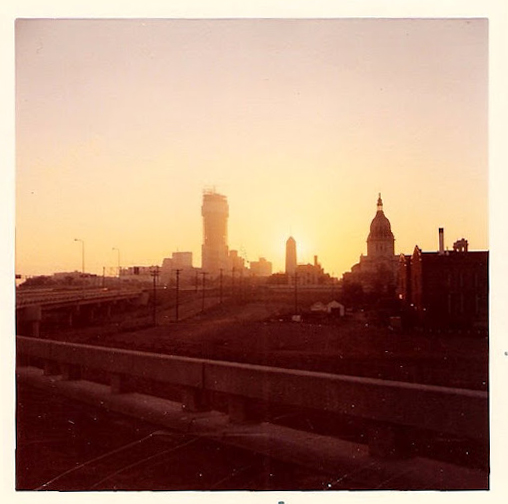 The IDS Tower, Annex building and the Hotel are all under construction. 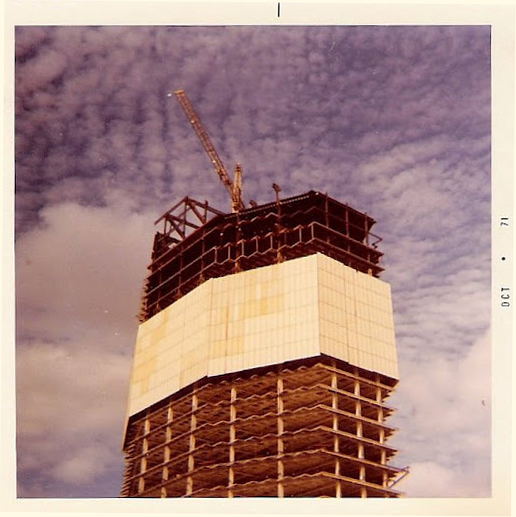 The tower’s last structural steel is set, one year and one day after the first column was installed. 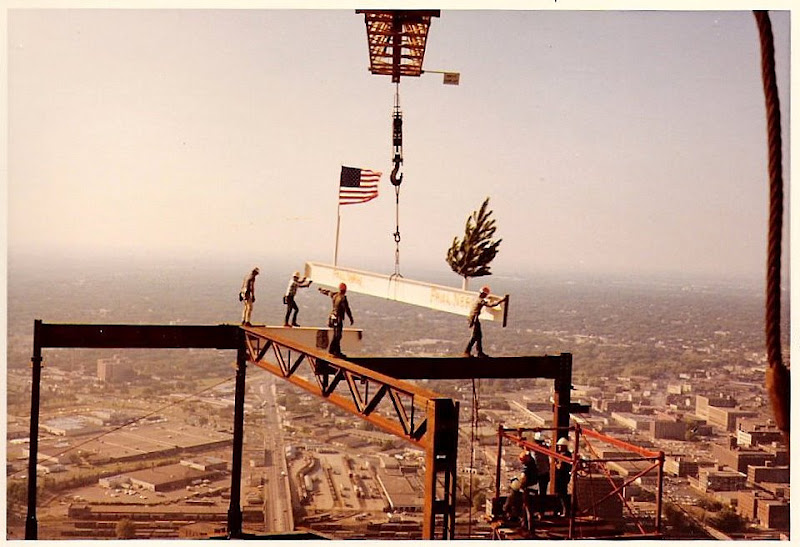 A 48,000 pound, high-strength structural steel column was bolted into place at the construction site, marking the start of the steel phase of the development of the IDS Center.

Demolition of the block begins.

IDS (now Ameriprise) joins the project as an anchor tenant.

Baker Properties (developer of the nearby Northstar Center) and Minneapolis architect Edward Baker propose a 12-story tower at Eighth Street and Nicollet Avenue.

The original plans were developed for a 12-story, quarter block building for Investors Diversified Services (IDS).

In the Midst of Making Headlines 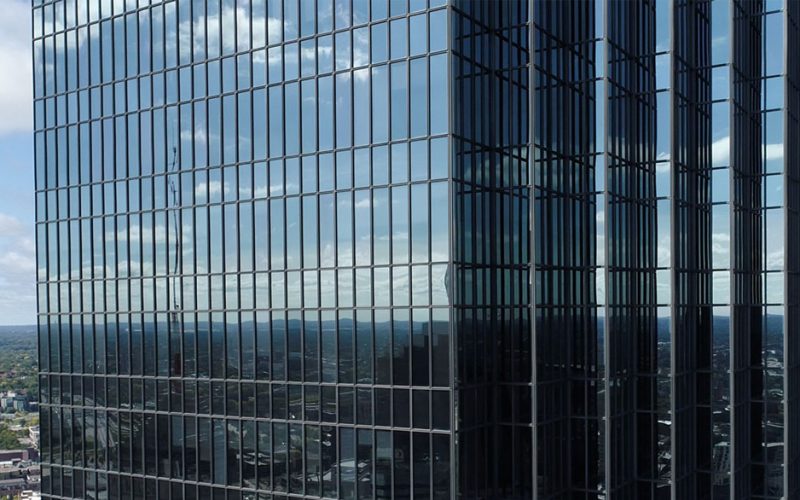 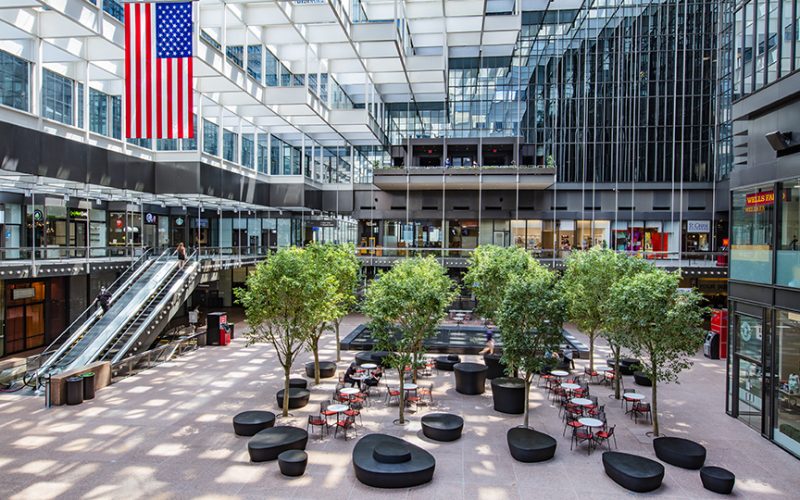