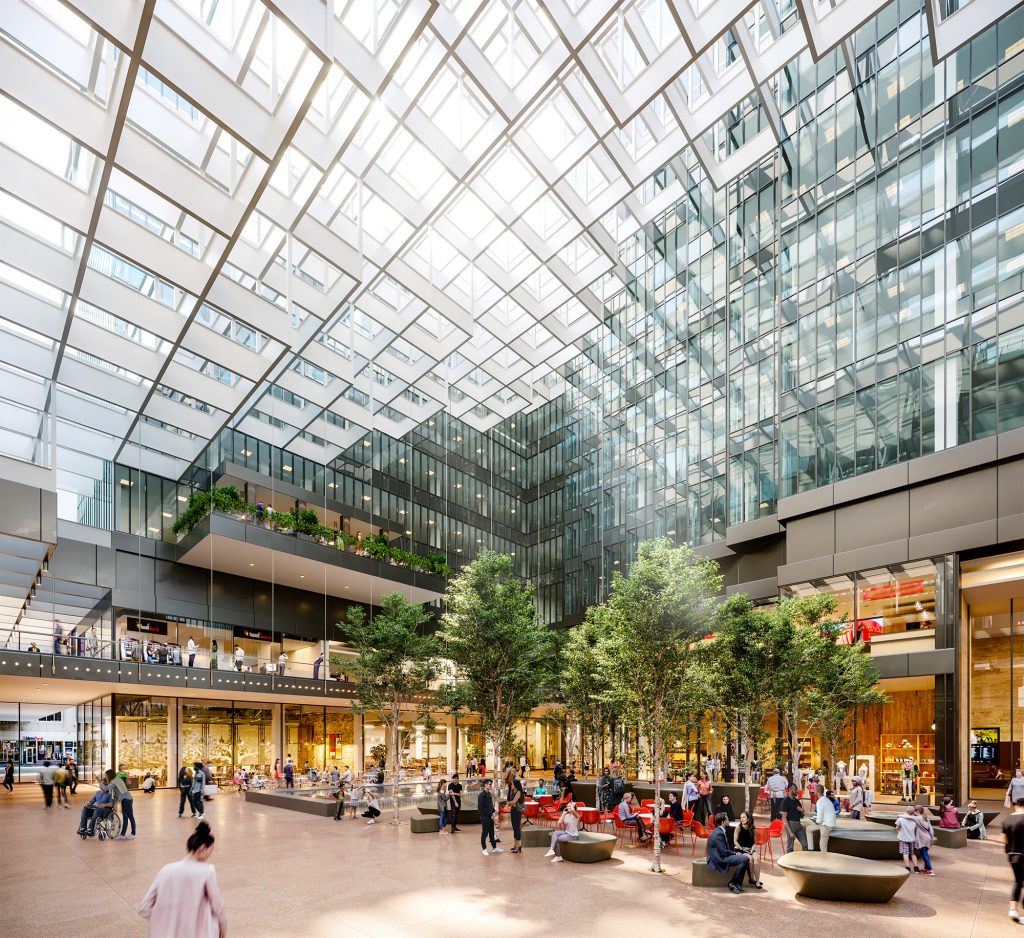 The most famed indoor gathering spot in downtown Minneapolis, the IDS Center’s Crystal Court, is getting a $5 million facelift.

Accesso, owner of the IDS Center in downtown Minneapolis, recently released a series of renderings detailing the planned revamp of Crystal Court, the busy public space on the ground floor of the 57-story tower.

The renovation plan for the nearly 50-year-old courtyard was designed in collaboration with architects Perkins and Will and New History. The goal of these plans? To update the space while still honoring the work of renowned architect Phillip Johnson, who designed the IDS Center.

This is an important project. On a normal workday – during pre-pandemic times – the Crystal Court is humming with businesspeople, tourists and downtown residents, some rushing through the court, others lingering by the court’s trees or eating lunch by a fountain. Plenty of people, then, will be watching this renovation.

But Deb Kolar, general manager at Accesso, would have it no other way. She and the architects who have designed the plans say that the renovations will only enhance the court’s standing as Minneapolis’ central gathering place.

“The Crystal Court has always played an integral role in downtown Minneapolis. It’s always been a social gathering place for the city,” Kolar said. “It gets chilly in Minnesota. It’s nice to have this indoor park in downtown. It’s hosted many events during its time, civic events and philanthropic events. We recognize that this space is not just for the tenants of the IDS Center. It’s for the entire city of Minneapolis.”

Tony Layne, principal and managing director at Perkins and Will, said that the Crystal Court sits at the metaphorical corner of Main and Main, and has always acted as the heart of downtown.

“The Crystal Court is kind of the living room for downtown Minneapolis,” Layne said. “There are all the gatherings and planned events that happen there. But it’s also about day-to-day life. Because of the Skyway system and the court’s connectivity, if you are in downtown, you are often in the Crystal Court every day. This space doesn’t just have ceremonial importance. It has day-to-day importance. That means there is an extra level of responsibility in caring for it.”

The Crystal Court originally opened in 1972. The updated version of the court will feature new collaborative seating areas with modular furniture and an enhanced grove of overstory trees that will rise directly through the court’s granite floor. These trees will form a tall canopy of green space. The new court will also feature an infinity edge water feature.

David Dimond, principal and design director for Perkins & Will’s Minneapolis office, said that the Crystal Court is all about how people move through time.

“Time is shortened for pedestrians who flow quickly between street and skyway as they link into downtown,” Dimond said. “Time is stretched for those who find water, trees and casual seating an invitation to pause, gather and engage. We feel lucky to be refining opportunities for such engagement within this beautifully timeless place.”

As Layne says, visitors to the court experience the space in different ways. Some rush through the space on their way to work, barely pausing to glance at the trees or tables dotting it. Others go to the space to linger and relax. Some are in a contemplative mood and are enjoying the space by themselves. Others are in bigger groups, laughing and swapping stories.

“The space steps up to whatever need you have at the time,” Layne said. “Even during the day, the space changes. From morning to noon to evening, the different qualities of light change the feel of the Crystal Court. Throughout the year, the space evolves and changes with the seasons. That shifting nature of the space was an important factor that we kept in mind when we were designing the renovations. We wanted to maintain that quality about this space and enhance it.”

The IDS Center has long been an iconic structure in downtown Minneapolis. The tower includes nearly 2 million square feet of mixed-use space, a two-story retail center, the 19-story Marquette Hotel and an enclosed eight-story urban park.

“Phillip Johnson’s Crystal Court is truly one of the iconic and most beloved sites in downtown Minneapolis,” said Steve Cramer, president and chief operating officer of MPLS Downtown Council. “The planned update will solidify that legacy for generations to come. And it couldn’t come at a better time as our downtown looks forward to a strong bounce back from the challenges of today. This timeless space reminds us of the enduring importance of downtown to the economic and social fabric of our entire community.”

Kolar said that Accesso will officially apply for its construction permits with the city in November. In late December, the construction barricades will start popping up at the court. In late January or early February, she said, hard construction will begin.

The last piece of the project? That is when the court’s new trees will be brought up from Florida in June of next year.

Kolar said that Accesso is taking its role of protector of the space seriously.

“The space is timeless,” Kolar said. “The bones of the space are so spectacular. There was such a thoughtfulness that went into putting this space together. As the space has evolved over the years, it has still maintained this timeless beauty.”