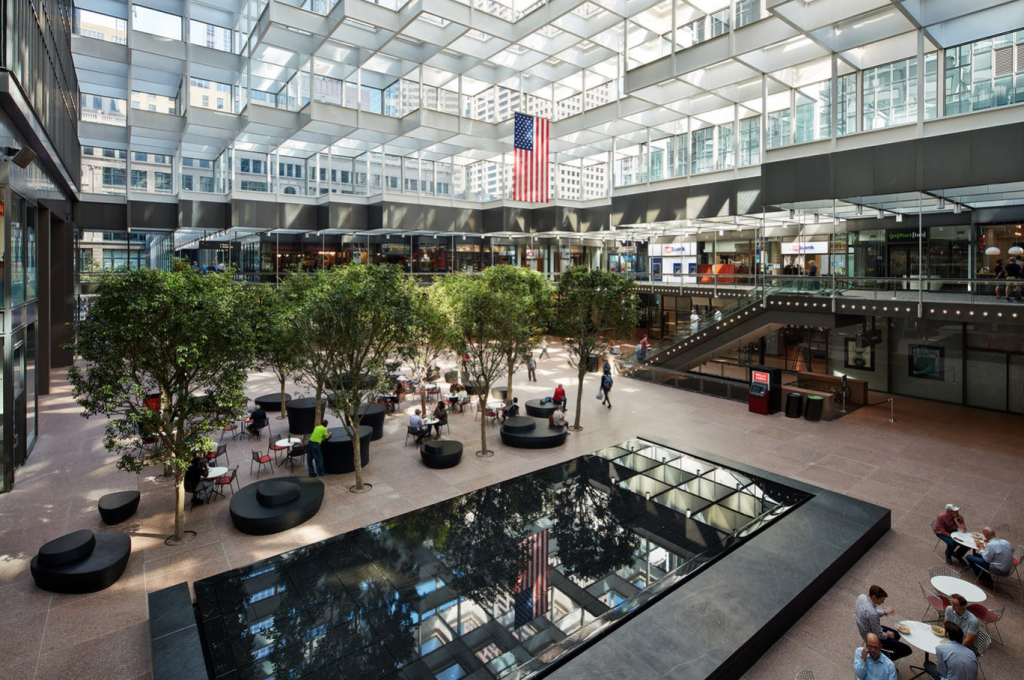 The welcome but subtle changes to Crystal Court are a towering achievement.

At first glance, the recently remade IDS Crystal Court doesn’t appear all that different. The key components — trees, seating, water — are still there.

But take a closer look.

“It was like pulling the old vinyl tile up on the house you just bought and finding beautiful hardwood floors,” says Tony Layne of Perkins & Will, the architecture firm behind the $5 million rejuvenation. “The project wasn’t about following a trend, it was about uncovering what was already beautiful, and bringing clarity to it.”

Olive trees in boxy planters have been replaced with a dozen soaring ficus benjamina wintergreens that appear to magically burst out of the pink granite floor. The trees’ roots thrive in an unseen and ingenious planter system that was constructed in an underused concourse-level space.

Furniture includes midcentury-appropriate Bertoia chairs, set around handy tables for patrons of the court’s quick-service restaurants. Perkins & Will also designed free-form bench seating — fashioned from sustainably-minded biopolymers and produced by a 3-D printer — that echo back to the modular furniture installed in the 1970s by architects Philip Johnson and John Burgee.

Fans of the previous fountain (installed in 1998) will be happy to learn that its replacement — a raised, rectangular reflecting pool — continues to emit the calming sound of falling water. Its gleaming black granite surface, skimmed by a thin layer of water, mirrors the court’s spectacular steel-and-plexiglass ceiling.

Thanks to a battery of discreetly placed LED lights, those overhead white cubes are dazzlingly illuminated at night. Now, more than ever, the cascading roof seems to float, cloudlike, over the court. From every angle, the crossroads of downtown Minneapolis appears as pristine and welcoming as the day the doors opened a half-century ago.

“I remember when the construction walls were first taken down,” says Jeremiah Collatz of Perkins & Will. “From that very first minute, you would turn around and someone would already be using and embracing that aspect of the court. For me, as a designer, that was the highest compliment that I could have ever imagined.”