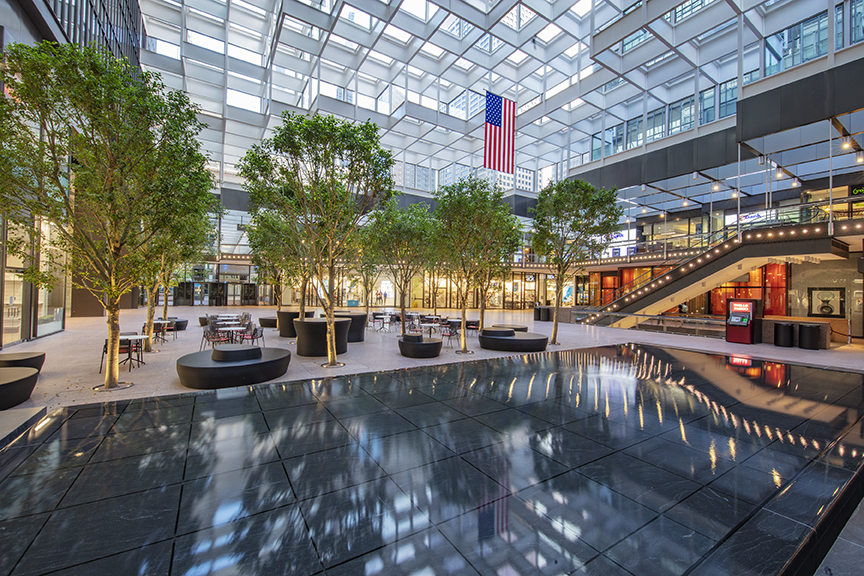 At a ceremony on Thursday morning, business and community leaders marked the completion of a $5 million renovation project to the Crystal Court at the base of the skyscraper.

You might not even realize there’s been a major renovation project at the base of the IDS Center. In some ways, that’s by design.

On Thursday, local leaders gathered at the IDS Center to mark the completion of $5 million worth of renovations to Crystal Court, long known as the “living room” of downtown Minneapolis. Peter Hendee Brown, acting principal with New History who consulted on the renovations, said the changes are intentionally subtle.

“Subtlety is one of the traits of sophisticated design,” he told a small crowd.

Perhaps the most significant change? The overhead waterfall structure is gone. It’s been replaced with a small pool, which project leaders say can be drained and converted into a stage for events.

The center, which opened in the ‘70s and hasn’t had a major update in 20 years, now features new seating, too.

Though the changes aren’t grandiose, local officials still view the renovation project as a symbol of a renaissance in downtown Minneapolis. They implored the crowd to come back downtown, spend money, and socialize as normal. They’re confident that downtown will return to its glory days, despite concerns about public safety and renewed fears about Covid-19.

Minneapolis mayor Jacob Frey, who delivered remarks via video due to a scheduling conflict, said that “Minneapolis is open for business.”

“Now is the time to rejuvenate our city,” he said. “Come back downtown. Get back to work.”

Steve Cramer, president of the Minneapolis Downtown Council, said the changes at Crystal Court represented a “turning point in the reimagining of downtown after 16 long months.”

“We’re on the upswing,” he said. “This is a symbol of positivity and momentum.”

According to the council, about 33 percent of downtown workers have returned to the office. A great many more are expected to come back after Labor Day, when some of downtown’s biggest employers will call their workers back. That includes Wells Fargo, the third-largest employer downtown.

When it comes to office return plans, tenants in the IDS Center are “leading the way,” Cramer said. About half of workers in the tower have returned, according to the council. The IDS Center is home to a number of law firms, including Ballard Spahr.

Deb Kolar, who serves as general manager of the IDS Center for real estate firm Accesso Services LLC, said the Crystal Court is a “public-private space, where everyone is welcome.” When the project was first announced in October 2020, Kolar said that the “IDS Center is still the gathering place, the center of town.”