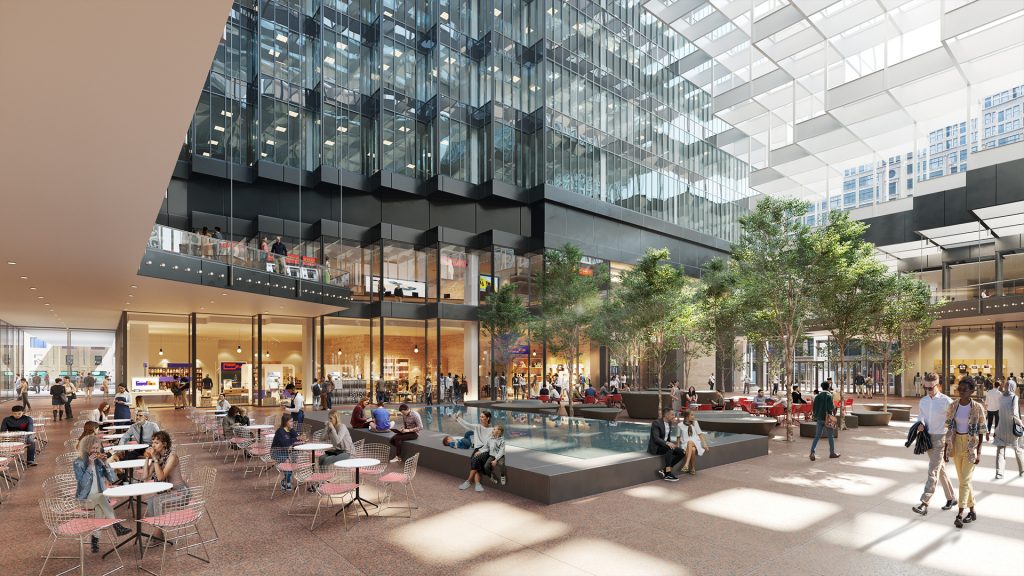 A seven-month project will introduce taller trees, new seating and a revamped water feature to the “social skyscraper.”

A revamped Crystal Court in the IDS Center will feature new seating and canopies of taller trees. It is the first remake for the space in 22 years.

The Crystal Court space in the iconic IDS Center is getting a major makeover.

Accesso Partners, the owner of the 57-story building, said it will spend $5 million to revamp the space that has been a popular public gathering spot for nearly 50 years.

The last time the space was updated was 22 years ago, so it’s time, officials said.

The Crystal Court opened in 1972 and was always intended to be a destination and gathering place for people from all walks of life, project leaders said. The changes, expected to take seven months to complete, will ensure the court’s urban-park theme continues.

“The IDS Center is known as the country’s first ‘social skyscraper,’ and this renovation aligns perfectly with his [architect Philip Johnson] original vision for the space,” said Deb Kolar, Accesso and IDS Center general manager.

During construction, protective walls will be erected and covered in murals by local artists from the north Minneapolis visual-arts center Juxtaposition Arts.

Once construction finishes next summer, those walls will be relocated to reveal a new court with an infinity-edge reflection pool with moving water, new modular seating and trees that will no longer depend on garden boxes.

Instead, ficus benji wintergreens will be planted below the granite floor and will be expected to grow 24 feet tall, 10 feet higher than the current garden box trees.

The 68 white benches that now flank the tree boxes will donated to the Minneapolis Good Chair Project, a nonprofit group that helps create public spaces.

The grander scale of the new trees and water feature should create a space that is very green and airy with the soothing sound of running water, said Perkins & Will Design Director David Dimond, the architect of record for the project.

“The refreshed space will pay homage to Mr. Johnson’s legacy by accommodating all of the different ways people prefer to interact and engage today,” Kolar said.

Kolar said the project has been in the works for two years and was not affected by the pandemic, which has made some parts of the city a ghost town as many commuters stayed home.

By the time privately paid-for renovations finalize in July, Kolar said organizers hope the pandemic will be behind them so the IDS Center’s 97 tenants and the entire community can enjoy the new gathering space. The project investment is a signal that Accesso and the IDS building executives “believe in the city” of Minneapolis, she said.

The project has been presented to the Minneapolis City Council, Mayor Jacob Frey and the Minneapolis Downtown Council. Tuesday evening, a presentation was scheduled to be made before the Downtown Neighborhood Association.

The city has been badly impacted by the pandemic, protests over the May police killing of George Floyd and two splashes of violent riots that left downtown businesses with broken windows and stolen goods.

Minneapolis City Councilwoman Lisa Goodman said the latest investment in the structure is good news for the city. “I’m excited about the renovations to the Crystal Court and appreciate the continued investment in our downtown,” she said.

The story can be accessed here.