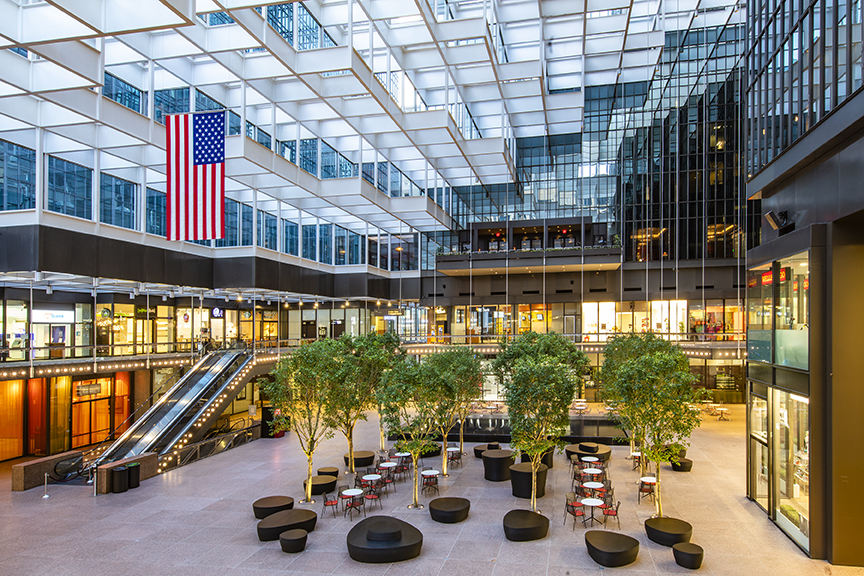 Local leaders celebrated the reopening of the IDC Center’s Crystal Court. Renovations to the urban park included a new infinity pool, updated trees and seating, and the removal of the waterfall. (Submitted photo)

The $5 million renovation of the IDS Center’s Crystal Court has brought modern features to the iconic urban park, which project leaders hope welcomes workers and visitors back to downtown Minneapolis.

The Crystal Court celebrated its grand reopening during a Thursday event. With an influx of workers and the reopening of businesses, leaders say the new space will serve as a meeting, lunch and gathering space for the public – much like it did in the past.

Most of the renovations are subtle, like updates to lighting, trees and seating. The space’s notable waterfall is gone, but the rest of it remains relatively the same.

“You see a really subtle, really simple, really sophisticated [and] really thoughtful design. … It makes this place much better by reflecting and strengthening on all that’s already great about the Crystal Court – without leaving any fingerprints at all,” said Peter Hendee Brown, acting principal with project consultant New History, based in Minneapolis.

Accesso’s investment in the project, along with other notable projects in the area like the Dayton’s Project, Rand Hotel and Water Works parks, reflect continued interest in downtown, said Steve Cramer, president and CEO of the Minneapolis Downtown Council.

“It’s a great sign of confidence in downtown, which comes at a time when all signs of confidence are more important than ever,” Cramer said.

Downtown’s office occupancy has doubled in recent weeks, and Cramer anticipates another spike in occupancy after Labor Day.

Crystal Court was last renovated in the 1990s. Deb Kolar, general manager of the IDS Center, called the new space “welcoming,” which is reflected in the design and accessibility of the court.

“Trees, lighting, furniture, water [and] the sound of water. … When you combine all those things together, they attract the people,” Hendee Brown said. “How do you make that a little bit better?”

New modular seating is located at the court’s center, between trees. Benches that once made up the center of the court are now located in city parks. New ficus trees surround the seating area. They’re planted below the flooring, giving the tree’s roots more room to grow. The court also features a new infinity pool, which can be drained and turned into a stage, Hendee Brown said.

“It’s making this place more useful,” he said. “The ownership of this building has had to continue to adapt as we’ve all demanded the ability to use this place in lots of different ways.”