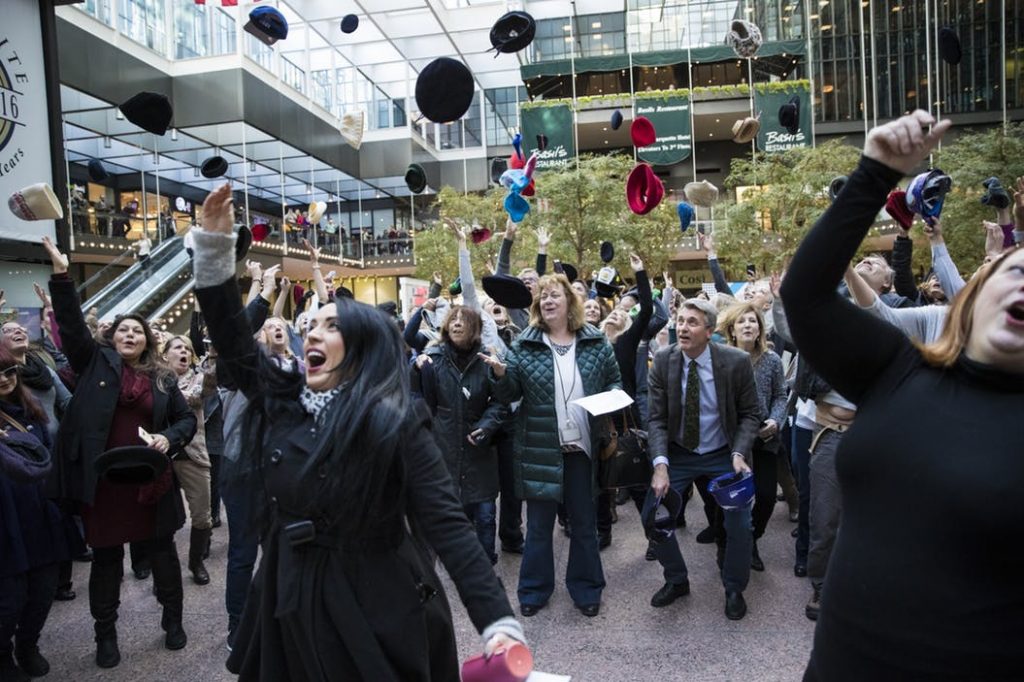 Maureen Mook remembers the parting words of her father as she left her small Iowa hometown in 1992. She was filled with youthful confidence that she would make it on her own in Minneapolis.

Her father expected her to give up and be back in Iowa in three months.

Instead, 25 years later, she stood Friday with more than 150 other women and a few men who came to fling their hats into the air, à la Mary Tyler Moore. The group, orchestrated by a local radio station, crowded the Crystal Court in the IDS Center to pay tribute to the television icon and her award-winning 1970s show, which was set in Minneapolis.

Friday’s group hat toss was a show of love for Moore, who died Wednesday at the age of 80 in Connecticut. Her show just didn’t make them laugh; it inspired a generation of girls to be just like Moore’s spunky television character, Mary Richards, an independent single woman with a can-do attitude.

“I came [to Minneapolis] with a degree and no job,” Mook said. And then she proved her father wrong, getting a communications job, marrying and having two kids. “I made it,” she said.

So did Schwei, who left West Bend, Wis., as a bartender and waitress in 1996 and started a new life in Minneapolis. “I wanted to say thank you to Mary,” she said. “I came to Minneapolis because it was far, but not too far. It was a big city, but not too big,” she said. “Twenty years later, I’m working as an IT director.”

Dana Rousseau of Roseville grew up watching “The Mary Tyler Moore Show” and “desperately” wanted to live in Mary Richards’ apartment in Minneapolis’ Kenwood neighborhood. That didn’t happen, but after working all her adult life in downtown Minneapolis, Rosseau had a secret desire to stand on Nicollet Mall and fling her hat, just as Moore did in one of the show’s opening scenes. “But I didn’t want to get run over by a bus,” she added.
The Crystal Court near the IDS escalator that Moore’s character rode up during the show’s opening scene would serve as a good substitute for hat tossing.

Carol Erickson-Clark wore a tiara, while others held onto the surplus store black tams that the radio station provided. Others came to fling what they wore — a felt fedora, knit hats, a fuchsia sequined beret.

David Borgula forgot his hat. He tossed a glove instead.

“I moved to Minneapolis sight unseen in 1985 because of the [Mary Tyler Moore] show,” he said. “The show was a huge part of my life. We would sit around and watch it every Saturday night. … It still stands up today,” adding that he had three episodes the night before.

With onlookers lining a second-floor railing to watch from above, Moore’s fans drew closer to sing the show’s theme song.

As the song trailed off, the crowd did what Mary Richards would have done — they jubilantly tossed their hats into the air. And then they left — a wish fulfilled.